But this story is still pretty great. Basically, I was in a dessert shop ordering when a Viet Kieu called out in English “Where are you from?” Being the loner desperado that I am, I stopped by to chat and it turns out that he’s a French skipper who races and navigates boats for a living. He’s from New Caledonia (small island in the Pacific near Australia) and was born in Danang. He came back to find his nanny before it was too late.

Anyway, I have to work so I introduce him to my one French speaking colleague who ends up being his senior by just a couple years, and it turns out that they went to primary French school together here in Danang about 30 years ago! Her dad was a teacher at the school and his was the director so they definitely ran in the same circles and were able to reminisce. It was amazing. Then we proceeded to have several fun French filled days of chitchat and good VNese food. What else would you expect?

So today I introduced him to Mimi and Eric, the other lovely francophones, and we had the BEST lunch ever 🙂 Ahhhhhhhh j’adore le francais! Yipeeeeeeeeee!

And here they are, George, Mimi and Eric 🙂 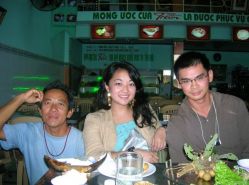